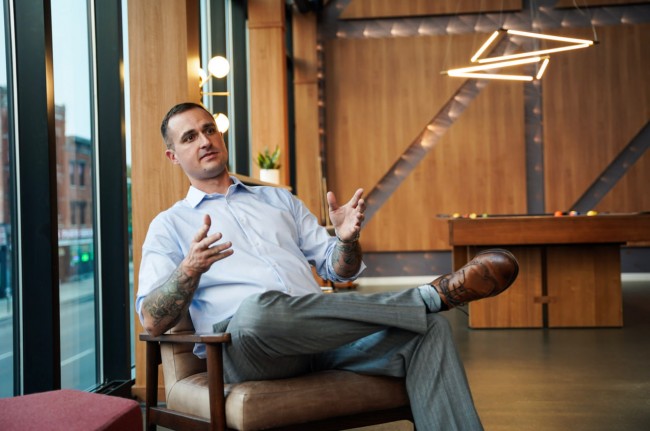 11:40 AM 2023
Print This Article Share it With Friends
by David Thompson 

Justin Smith was forced to make a decision, not unfamiliar to most high-growth startup founders: walking the traditional path, raising multiple rounds of dilutive funding with the hope of a lucrative five-year exit, or opting for equity crowdfunding, the scrappy - and debatably more risky - road less traveled.

Other leaders in Smith's position might view this decision as a no-brainer. But as the CEO of early-stage field service management startup Contractor+, Smith's unique sense of loyalty to his working-class customer base made the call for him.

"Our goal at Contractor+ is not to sell out or get swallowed up by a bigger fish who could care less about our customers. We've already turned down multiple offers. We want to keep innovating and disrupting and making the biggest difference in the lives of contractors and those they do business with." Smith said.

So late last year, despite a successful foray into field service management tech and the array of funding opportunities that followed, Smith and his team decided to raise their seed round with a Wefunder campaign via regulation crowdfunding.

"Before we shipped our beta, my partner Roshan and I planned to go the traditional path - series seed through B or C with an exit in 5 to 7 years. But since seeing how much of a difference our product is making in our customers' lives, and our customers' eagerness to invest, we're of the mindset that we may not need to work with VC's afterall," Smith said.

As the only tech startup catering to the workflow of contractors and their many partners, Contractor+ is trailblazing a new form of proptech. In many ways, it's a cultural fit for Smith and his team to choose to honor this first-of-its-kind business model with equity crowdfunding. The campaign will launch on February 1st, 2023 with a cap of $3.8 million, discounted for early birds.

As Smith guides Contractor+ through this next stage of growth, here's what he and his team are keeping in mind.

Unlike other proptech CEOs, Justin Smith actually comes from real estate and property management himself. His familiarity with the field service industry has resulted in tunnel vision - despite his natural gravitation toward entrepreneurship, he has no intention of leaving his creation behind any time soon.

"When startups 'build to sell,' they raise a few rounds of dilutive funding, and by the time they're ready to sell, the innovation has significantly slowed or even stopped altogether. These larger companies raise tons of capital, sell out, and all of a sudden, the customer's needs are long forgotten," said Smith.

"From a business standpoint, this isn't a bad thing, especially when making as much revenue as possible is the goal - but what makes startup culture so great is how such monumental differences can be made from so little capital. It's the small scrappy startups that often make the biggest impact."

Smith also chose regulation crowdfunding to underscore his commitment to his customers and lifelong industry:

"We decided to raise our seed round on Wefunder via RegCF so our existing customers could get a piece of the action. Great early bird terms coupled with the right perks for existing users is our recipe for successfully raising from within our subscriber base."

The Costs of Crowdfunding, Marketing, and Advertising

"We're going to do what's in the best interest of our product, our employees, and most importantly, our users - but, we're meticulously frugal. We really know how to stretch a dollar, and this skill will continue to be essential as our roadmap unfolds," said Smith.

This frugal mindset is guiding who Smith and his team target during the raising stage. Because Wefunder charges a 7.5% success fee on check sizes under $25,000, he's prioritizing prospecting and reaching out to angel investors, syndicates, and family offices.

In addition to platform fees, paid ads require careful consideration. The rule of thumb in paid ads for promoting a crowdfunding campaign is for every $1 spent on ads, $10 should be raised. While some paid ads will be utilized during this stage, they aren't the cornerstone of Smith's strategy - relationships are.

Finally, Smith was strategic when choosing the right crowdfunding marketing partner. He recognized the reason many equity crowdfunding raises fail is due to the cost-prohibitive nature of working with an agency, and not having the resources to adequately promote the campaign internally.

"We chose to hire an agency with extensive investor relationships. They know what it takes to get a campaign successfully across the finish line, and if you've never raised a RegCF round before, it's probably a good idea to not go at it alone, if you have the cash flow to support that decision."

Smith's decision to pursue regulation crowdfunding means that investor relations have never been more important. In Smith's view, Wefunder is their ticket to making sure they are able to successfully execute and bring their vision to life. The platform will facilitate the investments of average blue-collar working class folks who happen to be their most loyal customers, while aiding in the relationship building with a fresh pool of construction and proptech investors with a passion for what they're working on.

"Your campaign will not be successful if you're out of reach. Investors, especially those who're able to cut a big check, are going to want to meet the founders, make certain their vision and values align, and complete their own due diligence before jumping in. They're successful because they don't make bad investments. So it's important to have a way for prospective investors to connect and develop a relationship."

In the coming weeks, Smith hopes to find investors who appreciate his commitment to avoiding dilution, his general plan for preferred dividends, and his anti-exit strategy.

"A few weeks ago, I had the privilege of connecting with Bridger Pennington at the Tykes Summit in Vegas. Like me, he's a proponent of disruptive funding tactics. His company Fund Launch has helped over 20,000 students without prestigious Ivy League degrees or years of Wall Street experience successfully launch funds," said Smith. "When I told him I personally didn't plan on working with late-stage VC's, his advice was nothing short of validating: if you ever need to raise to buy out competitors or make a strategic play, avoid the unnecessary dilution and start your own fund."

By the end of the regulation crowdfunding phase, Smith hopes to raise $1 million from a mix of Contractor+ customers, early-stage VCs, and angel investors. The goal is to raise more than enough to never "need" to raise again.

"As we navigate the ups and downs of this next phase, I'm not afraid to get creative and do what it takes to remain focused on our product and avoid succumbing to dilution," said Smith. "I'm proud to prioritize my team, my customers, and the Contractor+ mission."