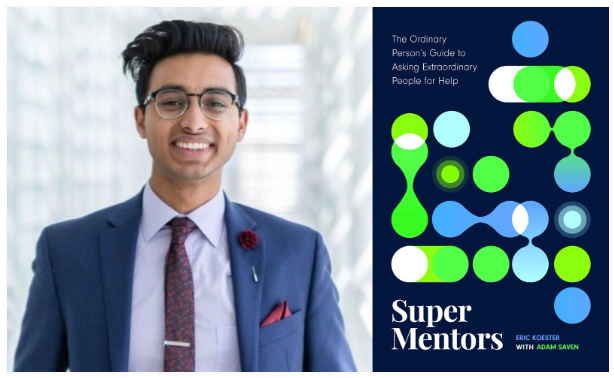 1:20 PM 2022
Print This Article Share it With Friends
by David Thompson 

A down-to-earth guide packed with wisdom and tools for your vocational quest.

Rahul Rana was named by Business Insider as one of the Top 29 Gen Z venture capitalists in 2021. As an associate for one of the best-known venture firms, Lux Capital, Rahul focused on "deep tech" ventures.

"I was far from your typical venture associate candidate," Rana, a then-sophomore at Rutgers University, shared, "which is probably why they hired me."

It is his unusual path to Lux Capital that is chronicled in Super Mentors: The Ordinary Person's Guide to Asking Extraordinary People for Help (New Degree Press) by Eric Koester.

"I grew up fascinated by technology and its potential to change our world. But not just any technology, the kinds of science-fiction-sounding ideas that could change everything. And I knew the best place to satisfy that urge was to get into venture. I really, really wanted to work in venture capital, and everyone I talked to said to wait my turn. It was depressing, but I kept getting told that I needed to find a mentor," he shared.

He was introduced to Koester, an author and professor at Georgetown University, who just happened to be the founder of a venture capital firm in Washington, D.C. "I figured he might have some decent advice," Rahul said with a chuckle. "Instead, he told me something very different. He said, 'you don't need a mentor.'"

Super Mentors represent nearly a decade of research into the world's most successful people. Koester studied Oprah, Richard Branson, Sheryl Sandberg, Bradley Cooper, Steve Jobs, and hundreds more. All of them had incredible mentors, but how they built their mentoring relationships was wildly different from what most people expected.

"Projects are tangible, finite, meaningful things providing us a reason to engage with people. They hopefully feel like fun (or at least don't feel like work). Then it's not just, "will you be my mentor" or "can I pick your brain." Your project gives you a context or a tactical reason for your engagement with someone. It is about matching your interests to the project you are excited about and then making the project more collaborative - it's a way to signal your interests to others." -Super Mentors

"Professor Koester told me in our first call that I needed a way to attract people to me," Rahul said. "And the best way to do that was through a project. For me, that project was working on a book. It was the book that led me to interview dozens of entrepreneurs, innovators, and investors, including Josh Wolfe of Lux Capital."

Super Mentors is filled with well-known success stories and the stories of others like Rahul who have accelerated their career through modern mentorship. Koester wrote this book after teaching thousands of his students, including Rahul, to reimagine mentorship based on his research. He describes it simply as helping his students to "aim higher, ask smaller, and do it again and again."

Super Mentors shares how we created a warped view of mentors that's been cultivated by movies and television shows, but most successful people have lots and lots of mentors:

"I never really thought about writing a book," he admitted. He hadn't realized that even if he never published the book, it would provide him with a critical tool to engage with the people he wanted to meet.

Having a book project of his own allowed Rahul to radically increase the number of potential opportunities he could earn.

Rahul's project allowed him to change his behavior. He engaged on social media with more people interested in moonshot ideas. He'd post his thoughts about moonshot companies. He had conversations with his new peers and near-peers. He continued to progress on his project, a project that required collaboration with these casual mentors he was cultivating.

One of these casual mentors would be Josh Wolfe of Lux Capital.

"I sent him a cold email about my book project, the activities I'd done and the people I'd met, and the context of why it was relevant to Josh and his work."

That cold email was enough for Josh to recognize the potential for the meeting to be valuable. Rahul still had to follow up seven times to get his first fifteen-minute call with Josh. But Rahul wasn't waiting on the meeting. He continued to work on the project.

Then, in their first phone conversation, Rahul shared his learning about moonshots and the mindset of moonshot founders. He asked Josh if it matched his experience and findings. Four months later, Rahul shared a single chapter he'd written based on insights from Josh and others.

"No resume, no interview, no application," Rahul said. "I sent him a chapter of my book, I thanked him for his contribution, and he hired me on the spot for an internship."

Super Mentors is packed with stories of today's most innovative individuals, making it a must-read for anyone in the venture capital, technology, or startup worlds.

The book is unlike any career or mentoring book I've ever read. Super Mentors is practical, fun, unconventional, and filled with opportunities for self-discovery and tools to follow. I was surprised and enthused to know what we want is closer than we imagine. Super Mentors has even inspired me to engage amazing people to amplify the magic in my life. It's a home run.