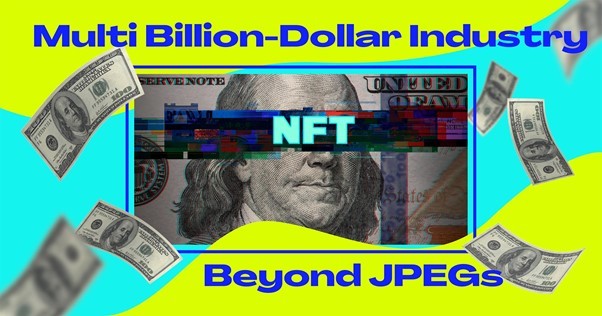 7:40 PM 2022
Print This Article Share it With Friends
by Patrick Jones 

NFTs have brought a revolution into the digital world by making their way into a series of industries ranging from art to gaming to finance and much more. And today, I am going to unveil some cool and surprising use cases of NFTs that will blow your mind!

Though NFT as a marketplace is akin to a vast and beautiful sea, yet it comes with a visible flaw - the insane attention and value to some fishes in the market but the rest being drowning at the bottom. Meaning, among all the assets listed on various NFT marketplaces, only a handful of them are able to command the prices and attention they deserve.

According to Bloomberg, in the 90 days through 20 September 2021, Monday, roughly 1.9 million assets were sold on the largest marketplace, OpenSea. But about three quarters never saw another transaction. Sadly, most of the investors judge NFTs merely by their visuals, but in reality, NFTs have so much potential and usability yet to be explored.

That is why Boolien is introducing Vizva, which is not just an NFT marketplace but also an open space for all those who want to unlock the true power and multi-usability of NFTs across different ecosystems and metaverses.

NFTs in the world of gaming

Since their inception, NFT games have focused on using native currencies for collecting NFTs that can be used in-game for special actions or held and sold later on all through Play-to-earn games.

In the virtual world of these games, NFT can take countless forms - characters, weapons, items, land, decorative personalization features such as clothing items and jewelry to name a few. Play-to-earn games allow players to distribute or sell their digital assets for real-world money at their own discretion, and pocket any money made from such trades. This is why this gaming model is called play-to-earn.

One of the recently launched glorious video games, Axie Infinity highlights the true potential of play-to-earn games in NFT space. Axie Infinity is a decentralized strategy game where users collect, breed, and trade fantasy creatures called Axies in Pokemon-style. However, according to a recent report by the blockchain research organization Naavik, Axie Infinity's player income is gradually declining.

But doesn't it hurt you as a player when you spend hours playing your favorite video game, earning a weapon that makes your character the ultimate fighter only to know that it is unusable outside that game? That all your hard-earned collectibles cannot be used in another game for character?

You may ask, "Yes it hurts, but what's the solution?"

Cross-chain NFT games. Meaning, there will exist interoperability between games which will enable players to port their digital items from one game to the next, trade in-game items seamlessly, and realize the full potential of their digital goods throughout the metaverse. Such cross-game assets, that you truly own, are the future of gaming. One such very popular project is the Loot Project.

At the same time, Boolien is working on a community-centered marketplace, Vizva - which would act as a launchpad for creators who have minds with limitless potential and possibilities and are looking to launch their projects at a global level. One such project Boolien has on board is Houseparty, a cross-platform storytelling IP.

Bitwise chief information officer Matt Hougan unveiled the launch of the Bitwise Blue-Chip NFT Index Fund in what he claimed was the world's first. He added that the fund, which rebalances every three months, would hold the ten most valuable NFT collections, including CryptoPunks, Bored Ape Yacht Club, Meebits, VeeFriends, and more.

Fig Portfolio is another example. Fig is a game funding and publishing platform which helps well-known and up-and-coming indie developers bring their games to life. Through Fig, you can invest in the success of a portfolio of amazing games, sequels to beloved classic IPs, and original games from established indie developers.

Blending NFTs with the offline world

What I am saying is, NFTs are finding their way from our online lives to the offline ones as well.

For instance, the NFT collection known as the Bored Ape Yacht Club (BAYC), started as merely a series of private chat rooms and a collaborative graffiti board. But now it has expanded to include social events and even a real-life party, which offers free attendance for all BAYC and Mutant Ape Yacht Club (MAYC) members.

NFTs are not just integrating into our lives but our hearts as well. Look at this mind-blowing NFT project: POAP - The bookmarks of your life. It enables you to keep long-lasting and secured records of your beautiful life experiences for as long as you wish to. Feels nostalgic, doesn't it?

Well, NFTs are now flowing in the blood of a few people. Just kiddin'. But did you know Professor George Church, co-founder of Nebula Genomics and Professor of Genetics at Harvard Medical School, will be auctioning off his full genome as an NFT? Yes, that's true.

Boolien unlocks the multi-usability of NFT in real life. It empowers creators to have their freedom of expression and work alongside their tribe members, from the ideas stage to raising funds and even distribution of their Intellectual Property through NFTs and Smart Contracts.

It aims to be the hub for the best of tomorrow's immersive experiences - art, movies, series, documentaries, games, and merchandise - on the blockchain. Boolien is for dreamers, visionaries, trail-blazers, disruptors, and of course epic creators to benefit from this cross-skilled collaboration culture. Boolien's success relies on you using their decentralized platform where your supporters can help you realize your dreams/IP.
Be a Booliener!