Close
(Credit: Here's Why MyCutTV Is Now The Top App For Nonprofits To Raise Money In 2021) 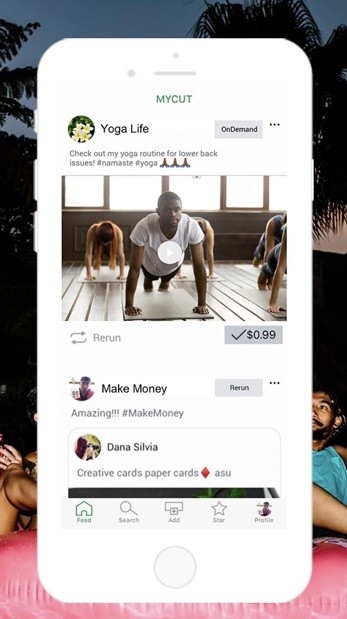 1:22 PM 2021
Print This Article Share it With Friends
by Ernest Hamilton 

In a world where digital content is in greater demand than ever before, MyCutTV is making waves as an exciting and easy way for creators to make money on their video posts. With a growing social media following and an innovative app for Apple and Android devices, MyCutTV has not only become a go-to hub for influencers, but also the top app for non-profits to raise money in 2021.

MyCutTV CEO Indi Wijay says nonprofits are very successful on his growing platform right now, and after creating his own network, the app is bigger than originally thought.

"MyCutTV is about changing human behaviors and connecting with people," Indi said. "With our app, nonprofit connections are based on relationships rather than advertisements. We're aiming for the stars but landing on the moon."

There's no shortage of opportunities for creators to bring their visions to life on MyCutTV, as the app offers a financial stream so individuals and organizations can monetize what they do, whether it's offering coaching or guidance in a certain area, or raising funds for an important cause.

One of the biggest concerns for nonprofits remains funding, a problem exacerbated by the pandemic and difficult circumstances for many would-be donors. MyCutTV gives nonprofits the chance to make their own money through a unique revenue-sharing model that helps even those without a large following generate income on their video posts.

While the impressive earnings of influencer marketing with college athletes, sports stars, and celebrities may seem out of reach for nonprofits, new technology like MyCutTV is bringing content creators closer to their goals, regardless of how many followers they have to begin with. This non-profit micro-funding opportunity ensures creators are compensated for their work and can share their content directly with fans, and through resharing, these videos can make quite the impact.

"We believe in creating opportunities so everyone has a chance. For people in today's world, the biggest thing they lack is opportunity, whether it's due to a lower income or physical attributes," Indi said. "But they are talented at something, and at the end of the day, people are always thankful to be given a chance."

What makes MyCutTV exciting is that even creators with just a few followers can make money, so long as one of their followers has a larger audience and reshares the content.

"In normal social media, having two followers means you are a nobody. The MyCutValue is who you know, and how far deep in your contacts or follower base can make you money," Indi said "If you post a video for a dollar and it gets two views, you make a couple of dollars. If one of your followers reruns the video to their 200k followers and half of them see it, you make $100k."

It may sound like a dream to some creators looking to make reliable money, but Indi and the growing number of MyCutTV users agree that it really works. MyCutTV does away with interrupting ads and complex social media algorithms, so content creators can post top-quality videos that enhance their followers' viewing experience with fees as low as $0.99. This setup lets nonprofit creators monetize content and raise both money and awareness for their cause.

By targeting the desired audience with no obstacles, MyCutTV puts relevant videos in front of the right eyes, giving nonprofit creators the best chance to spread their message and make the money they need to continue serving their communities. It's a one-of-a-kind, ad-free transaction platform, similar to Venmo and CashApp except they take the transaction and lay it over a social media post, meaning more plays equal more money.

Something else that makes MyCutTV stand out from other social sharing platforms is how there are no comments, likes, or follower counts. Indi says too many people are unfairly judged and receive negative comments, which is why they chose to focus on the bright side with MyCutTV instead.

"Making money should feel good and be positive - we want this to be a feel-good app. Likes are a strange valuation of people and we want to change the normalization of this feature, so MyCutTV is a win-win situation for everyone," Indi explained. "We are changing the way people see each other, as being kind and cool will increase your value."

As MyCutTV continues to grow and more nonprofits jump on board to take advantage of significant earning potential through influencer micro-funding, the team behind the app is thrilled to see what's next.

"Instead of attacking and judging like we see on so many other social platforms, we are building relationships to increase value. Nonprofits can create and unite while maximizing fundraising efforts and making long-lasting connections."

Avoid These Mistakes When Pitching to Venture Capitalists