Study Shows the Kids Who Love Dinosaur Are Smarter 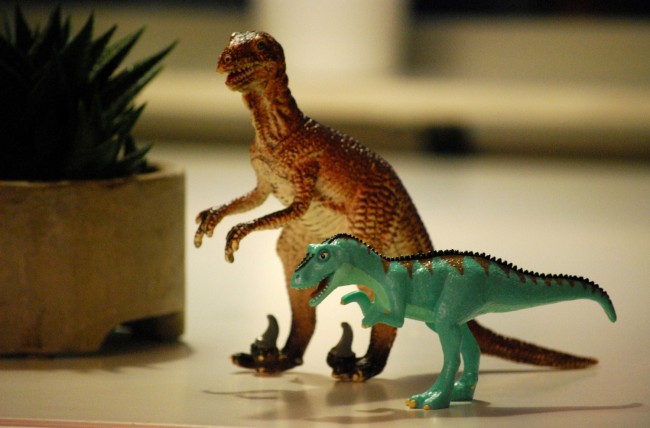 2:50 PM 2019
Print This Article Share it With Friends
by Staff Reporter 

It is commonly observed that kids love animal toys. And do you know there's an animal which doesn't exist, but the kids are still obsessed with that animal? Dinosaur is the animal most of the kids are obsessed with. They love to have different types of dinosaurs in their toy collections. Their jungle theme remains incomplete without them.

Though most of the kids like dinosaurs for some kids the dinosaurs are more than obsession. They want to see their favourite animal everywhere in their room, classroom, bed, desk, and even in the washroom. In psychology this extreme or extraordinary obsession is often termed as "intense interests".

Recently a study was conducted in a private university in Indiana. The study was conducted by psychology students about intense interests in kids. In their study, they tried to figure out what is that factor which attracts kids towards this creature which doesn't even exist on the surface of the earth. They observed that kids often talk to their dinosaur toys and they also make a roaring sound.

Keeping in view these interests, most of the toy companies are now producing dinosaur toys which can produce roar sound. And again, coming back to Indian University Study, the students observed that the kids who have roaring dinosaurs are more attached to this toy.

You might be amazed to know that the kids make roar sound only for T-Rex dinosaur. T-Rex dinosaur is considered the villain in Dinosaur family, but still the kids love this most. But again there's a strange fact, most of the animated cartoon movies like Dino and many more don't show T-Rex. Most of the animated stories for kids are about herbivorous. And that may be because herbivorous are plant eaters and look cute and innocent.

Whatsoever, kids still like T-Rex most. Most of the kids forget about their dinosaur obsession until the age of 3, but there are kids who don't want to leave this obsession. And as per the study that we were talking about earlier, such kids are smarter than other kids. These kids can even tell you the Latin names of different types of dinosaurs. And they also know what each type of dinosaur likes to eat.

After the age of 3, if their obsession with T-Rex or other dinosaurs doesn't go away, these kids often demand their parents for buying and riding T-Rex costume. They see T-Rex as their superhero. As other kids who like Spiderman, Batman, Hulk, Ironman etc. love to wear their favourite superhero costume, the kids with dinosaur obsession love to wear and ride in T-Rex costume.

Aqib Ijaz is a Digital Marketer, Link builder, Guest Post, and IT Professional. He loves to write on different topics. In free time, he likes to travel and explore the different parts of the world. You can follow him as a blogger outreach on eyesonsolution.

How to Find the Best Injury Lawyer for You

How To Find The Best Loan For Your Business

Study Shows the Kids Who Love Dinosaur Are Smarter

3 Steps for Hiring Seasonal Employees for Your Small Business

Is the F.I.R.E. Method Your Chance at Early Retirement?